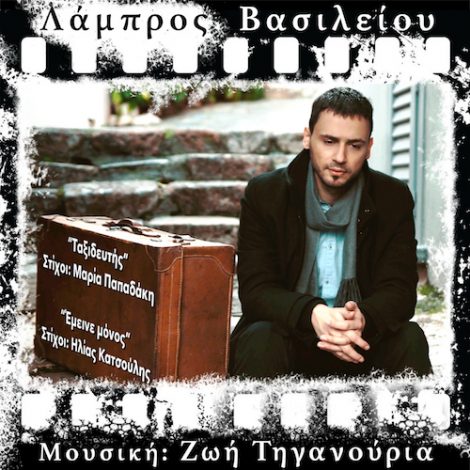 The first song of the album entitled “Taxideftis” (The Traveler) with lyrics by Maria Papadakis, reminds us sounds and pictures of another era, more authentic and romantic, with a video directed by Thanos Lyberopoulos and the participation of the talented actor Filio Tsobanidou.

The second song’s lyrics signed by the passed lyricist & writer Ilias Katsoulis and music again by our favorite composer & accordion virtuoso, is entitled “Emeine Monos” (He’s Left Alone). It is a wonderful ‘Zeibekiko’ that touches the listener’s heart from the very first notes, played by the experienced musician’s tusk Nikos Katsikis.

The two songs chosen by the interpreter from the unreleased material of the composer’s personal archive, look like two consecutive chapters of the same story. The “Traveler” who is “Left Alone” by Labros Vasileiou.

Zoe Tiganouria continues with her distinct compositions, to collaborate and promote new talented voices, offering artistically an authentic and more human aspect to the Greek discography of today.